In the refugee assistance world it is hard not to overuse the word “challenging.” It unfortunately, and often only diplomatically, characterizes the growing refugee crisis, the political situation in a number of countries including the U.S., and, of course, the plight of refugees themselves.

This year, according to the U.N Refugee Agency (UNHCR), there are nearly 26 million refugees worldwide, the highest number ever recorded. Of those, more than 1.4 million refugees cannot remain safely where they are and are in need of resettlement. In many areas of the world, people are fleeing violence and persecution and in the U.S. the Trump administration has continued its actions against asylum seekers at the U.S. southern border and set the refugee admissions cap to an historic low.

And yet, HIAS is encouraged. Not just that our work will continue to have an impact despite the mounting pressures contributing to the record 70.8 million displaced people in the world, but that we are doing more than ever before. HIAS’ mission to provide legal protection, psychosocial care, economic inclusion programs, and gender-based violence (GBV) prevention and response programming not only continues, but is growing.

In 2019, HIAS opened new offices in Mexico, Peru, and Colombia, countries experiencing an unprecedented influx of refugees and asylum seekers. In a new HIAS office in Belgium we are engaging the European Jewish community and developing ties to EU institutions. With this expansion, the organization’s network now reaches 15 countries across the United States, Mexico, Europe, Africa, the Middle East, Central and South America and the Caribbean. 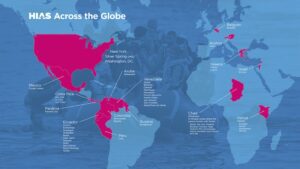 In 2019 HIAS opened new offices in Belgium, Colombia, Mexico and Peru, and grew our work at the US/ Mexico border and programs in Ecuador and Venezuela.

With that eye to the future, we now take a look back at some important moments in 2019: